D+D brought Symphony In Blue back to life with JOHNNIE WALKER BLUE LABEL last night bringing together icons from the worlds of film, music and F1 to SYMPHONY IN BLUE, MONACO - an experiential spectacular that transported guests including Eva Longoria and Jenson Button into a universe of flavour, craftsmanship and dramatic storytelling.

Hosted inside one of Monaco’s most revered buildings, the Ermanno Palace, Symphony in Blue kicked off a long weekend of glamour, style and sophistication. As anticipation in Monte Carlo grew for one of the greatest jewels in the motor racing crown – the Monaco Grand Prix - Johnnie Walker Blue Label and McLaren celebrated the 10th anniversary of their partnership.

Just sixty guests from around the globe were invited to Friday’s intimate Symphony in Blue experience, which showcased how imagery, sound, light and the tactile environment can influence the perception and taste of a whisky hailing from the four corners of Scotland

Done + Dusted originally brought Symphony In Blue to life in London 2014 with rave reviews. Find out how the experince was created in London by watching the behind the scenes video >> 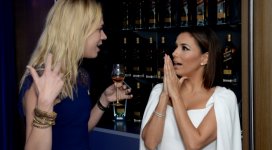