The Britannia Award is the highest accolade presented by BAFTA Los Angeles, and is a celebration of achievement honoring individuals and companies from the US, UK and beyond who have dedicated their careers or corporate missions to advancing the art-forms of the moving image.

The Awards are presented annually at The British Academy Britannia Awards gala dinner, where peers and colleagues celebrate the work and accomplishments of the distinguished honorees and gather to celebrate the fruitful relationship between the UK and US industries. 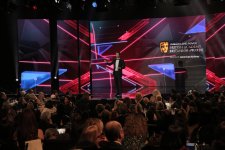